'Lucky Few' Refugees Get To Resettle In Massachusetts 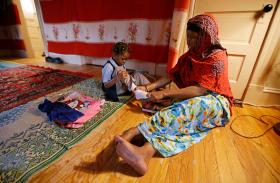 There's much debate these days over how this country should handle the thousands of immigrants who come into the United States illegally, especially the unaccompanied children who come here from Central America via the U.S. Mexican border. But there are many people — refugees — who come to this country legally.

This year alone, some 70,000 refugees will resettle in the United States. They will be allowed into our country under U.S. law because they fear persecution in their own. Either because of their race, political or religious views, nationality, or their membership in a particular social group. Their backgrounds vary considerably.

"We get refugees with no literacy in their own countries to people who are Ph.D.-educated," said Marjean Perhot, director of refugee and immigration services with Catholic Charities of Boston. She says it varies greatly based on region, country and background.

"You have some people are outside of the big cities and are very poor but then you’ve got the exact opposite," Perhot said. "Those who make it here to the U.S. are the lucky few. While we accept more refugees than all other nations combined, it amounts to less than 1 percent of the world’s estimated 15 million refugees."

So how do you become one of the lucky few?

"Refugee resettlement process — it’s a long process," said Mohammed Najeeb of Lutheran Social Services in West Springfield, which will handle the resettlement of about 400 refugees this year.

"They flee their countries to a second country," Najeeb said, where they apply for refugee status with the UN High Commission of Refugees. Each applicant is thoroughly vetted. "Background check, because they want to make sure we’re resettling the right neighbors. Medical check, they do all of that. They have to meet with the Department of Homeland Security and to go through a series of screening and vetting."

In the interim, many applicants live in refugee camps, sometimes for years — even decades.

When approved, their placement here is intended to be permanent.

"They are coming here to live in the United States, do their role in society, be productive and respect the law," Najeeb said. "So you get your permanent resident card after a year, and then you become a citizen after five years."

All told, some 2,400 refugees will be resettled in Massachusetts this year — typical of recent years.

About 40 percent come from Iraq, the most common country of origin of late. But Najeeb points out that Massachusetts also receives a substantial number from other places.

And looking ahead, there’s expected to be a spike in Syrians refugees, following recent turmoil there.

Nearly 90 percent of all refugees to Massachusetts end up in one of four communities: Lynn, Worcester, Lowell, and Greater Springfield.

Now, the program is not without it’s critics. Last month Springfield Mayor Domenic Sarno asked the federal government to stop sending refugees to his city, claiming they were a strain on the city’s already strapped economy.

Perhot admits that serving refugees is a challenge — and part of that challenge is financial.

"Maybe not everybody, in six months, is working and able to sustain themselves without accessing public assistance such as cash benefits or food stamps," she said.

But she also says that in her 20 years experience, by and large, refugees in Massachusetts do eventually succeed.

"There’s little successes and big ones," she said. "The majority adjust to become legalized residents and then to become naturalized citizens. We have some of the best employment outcomes in the country. I just continue to be amazed everyday by the people I see and the successes that they have."